LIVING 12:00 AM by Tiffany Mayer Special to The St. Catharines Standard 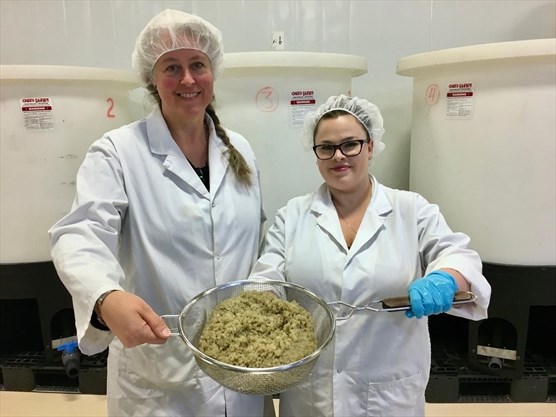 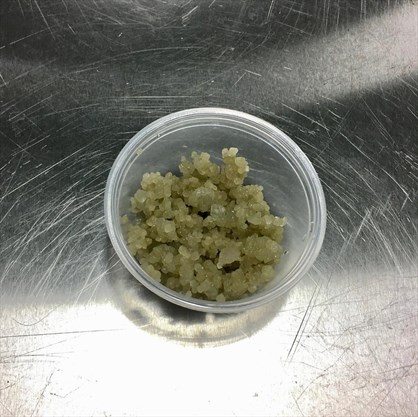 Water kefir grains, known as tibicos, are a clusters of yeast, beneficial bacteria and polysaccharides. – Tiffany Mayer , Special to The St. Catharines Standard

That undeniable luscious funk caused by sugar and yeast tag-teaming to ferment something fills the air in a way that encourages long and full breaths to drink it all in.

But Payne-Zimmer, owner of Tibbev on Keefer Road, isn’t brewing up Niagara’s next big thing in boozy beverages. Instead, the Toronto transplant is adding to the bevy of alcohol-free, fermented drinks flooding supermarkets and gullets of the health-conscious with her Raw Tibicos brand of water kefir.

And she’s willing to bring it right to your front door with a growing fleet of mobile kitchens delivering growlers of the fizzy drink that’s akin to pop for grown-ups.

“In the food world, it’s predicted to be one of the big trends,” Payne-Zimmer said about water kefir and other fermented drinks.

Think of water kefir as the more sedate cousin of kombucha, a fermented tea product that’s become as common on store shelves as cola.

It’s less sweet and doesn’t boast the caffeine content of kombucha. But like the fermented tea, water kefir is gaining ground with the thirsty because of its touted health benefits.

Fermented foods have been billed as good for the gut, providing beneficial bacteria and certain B vitamins, including critical B12, linked to healthy blood and nerve cells, and preventing certain types of anemia.

Payne-Zimmer started drinking the stuff 10 years ago as an alternative to alcohol. It was about the time actor Lindsay Lohan was spotted sporting a bottle of kombucha, setting off a craze expected to have a market value of US$1.8 billion by 2020, according to industry reports.

Payne-Zimmer dabbled in DIY kombucha at home but that went sour thanks to the slimy mother, called a scoby, necessary to ferment tea.

“The issue I find with kombucha is it’s an incredibly strong culture. It invades everything,” she said. “I’d open my fridge and find kombucha mushrooms.”

Water kefir, by contrast, is made with a starter called tibicos, which looks like coarse sea salt. Tibicos grains are clusters of yeast, beneficial bacteria and polysaccharides co-existing peacefully to produce a low-sugar, caffeine-free beverage that, depending on the flavour, tastes like alcohol-free beer.

Water kefir’s fermentation process happens faster than kombucha — sometimes in as little as two days versus one week to one month.

It also boasts another benefit that kombucha doesn’t: a long shelf life.

“Because it’s not pasteurized, it doesn’t go flat,” Payne-Zimmer said. “If you leave it in the fridge a while, it will maybe turn more sour but that’s it.”

Friends knew she was on to something with her homemade water kefir and so did she, thinking the market for it would develop alongside kombucha. Her instincts were bang-on. In 2016, PepsiCo acquired KeVita, one of the largest water kefir producers on the continent.

Earlier this year, she moved operations from North York to Niagara, rebranding as Tibbev (pronounced Tib-Bee-Bev) and selling some of her dozen flavours of Raw Tibicos, including rose, beet and chrysanthemum, at the Niagara-on-the-Lake and Pelham supper markets. She also has a version flavoured with hops for a worthy beer substitute.

“People kept coming up to us (at supper markets) saying it reminds them of beer. Well, we can make a hops one, then,” Payne-Zimmer said.

She’s launching a fleet of food trucks this fall to sell her water kefir on street corners in Niagara Falls, St. Catharines and anywhere else city bylaws permit. Payne-Zimmer will do catering, as well, and plans to partner with community organizations to offer the locally made health drink on location, which will be posted online each day.

Her “Fizz Kitchen” vans will also offer her homemade vegetarian and vegan soups, made at Tibbev. Fermented vegetables, such as cucumbers and garlic, made with the water used to store her tibicos grains, will be offered on the side.

The line of 15 soups is made without thickeners and commercial broth, she said.

“There’s nothing on the label I can’t read,” said Tibbev brewer and soup maker Hilary Hauck, who graduated from Niagara College’s culinary innovation and food technology program. “That’s one of the things I liked about Leslie. This is homemade and it tastes good.”

People who can’t make it to a Fizz Kitchen location can text a truck to deliver a minimum $20 order, which is a litre of soup and a growler of water kefir. A retail outlet at Tibbev’s Keefer Road headquarters is also in the works.

“(Water kefir) combines really well with food,” Payne-Zimmer said. “As long as we’re doing the vans, it makes sense to have a total solution in terms of eating and drinking. Also, I like the challenge of developing foods. It’s just a healthier version of a food truck.”

Tiffany Mayer is the author of Niagara Food: A Flavourful History of the Peninsula’s Bounty. She blogs about food and farming at timeforgrub.com. twitter.com/eatingniagara

Leslie Payne-Zimmer is the founder of Raw Tibicos, and writes on this site about issues related to vegan, vegetarian food and pro-biotics. Please check out related sites, www.fizzkitchen.ca for information related to running a local business, and www.tibibev.ca for writing on sustainable company initiatives.

Check out our other web sites!

www.tibibev.ca —  hiring and other opportunities